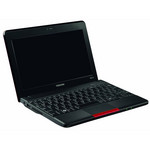 And that’s the story of the NB510 across the board – scaled-down but tolerable specs compared with its full-sized brethren. Netbooks aren’t really a good alternative to full-sized laptops, but for a portable machine for surfing or light document-editing, the occasional movie and general all-round decent performance, the NB510 is a fair deal.
Single Review, online available, Short, Date: 06/12/2012
83% Toshiba NB510 review
Source: PC Pro

That’s a relatively minor blip on an otherwise spotless record. Toshiba has built a fine netbook in the NB510, and one that’s all the better for the presence of Intel’s new Atom. CPU performance is still as limited as ever, but the addition of HD video acceleration turns this 10.1in netbook into a cheap little entertainment device, perfect for watching movies on a commute or long-haul flight. With all the usual netbook strengths combined with solid design, the NB510 reminds us why we loved netbooks in the first place.
Single Review, online available, Short, Date: 05/28/2012
Rating: Total score: 83% price: 100% performance: 23% features: 67% ergonomy: 67%

The Toshiba NB510-10D does all the netbook essentials and does them well. It’s not outstanding in any regard, but neither does it have any serious failings (aside from perhaps its speaker performance). If you can’t afford a more powerful ultraportable or a tablet with keyboard dock/base, it’s a solid choice, and our favourite so far.
Single Review, online available, Medium, Date: 07/06/2012
Rating: Total score: 80% price: 80% performance: 60% features: 70% display: 80% mobility: 70% ergonomy: 80%