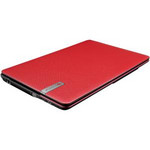 This is a great machine at a great price. The Sandy Bridge processor inside is astonishing, the case is built well with an excellent full-size keyboard, and if you can forgive a few cut corners, this is an ideal non-gaming laptop.
Single Review, online available, Short, Date: 03/23/2011
Rating: Total score: 80%