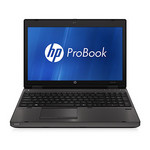 Reviews for the HP ProBook 6560b

Because of its size and weight, the 15.6in ProBook should be considered only if you want a desktop replacement-style notebook that you'll rarely have to take on the road with you. It's quite heavy, it doesn't have USB 3.0, it doesn't make use of switchable graphics and it could use better input devices, as well as 64-bit Windows by default.
Single Review, online available, Long, Date: 07/01/2011
Rating: Total score: 60%
HP ProBook 6560 Review: Business Class Notebook With Looks & Performance
Source: Notebooks.com

The HP ProBook 6560b is a welcome upgrade to the ProBook line and includes hardware and software improvements that end users will notice. The processor is more than capable and notebook has a great case that looks nice and provides durability. Inside, you will find one of the best keyboards we have used and a number pad which will come in handy more than you imagine. Combine the superb hardware with the software and it is clear that the ProBook 6560b is a notebook that IT managers need to consider before deploying notebooks to mobile professionals.
Single Review, online available, Medium, Date: 05/11/2011