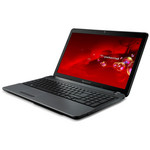 Archive.org version
Overall, the Packard Bell has plenty of raw performance and if you are prepared to accept a few compromises this is possibly the best £400 deal you’ll find right now. Gamers should steer clear, though, but if you’re looking for something that will whizz through most tasks whether at home or on the road then look no further.
Single Review, online available, Very Short, Date: 09/14/2011
Rating: Total score: 90%