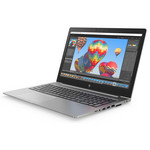 80.2% HP ZBook 15u G5 (FHD, i7-8550U) Workstation Review | Notebookcheck
Too much Office, not enough Workstation. The ZBook 1xu series is at the lower end of HP workstation devices. These models are based on the EliteBook to save costs. Find out in this review of the ZBook 15u G5 why this concept still doesn’t work.
HP ZBook 15u G5 review – ultra-mobile workstation
Source: Laptop Media

Although the good performance of HP ZBook 15u G5 was entirely expected, the model surprised us with a great multitude of merits. The reliability and rigidity are very important for business machines and the HP company has made sure its 15u G5 is able to withstand 14 of the MIL-STD-810G military tests for work in harsh environments. Despite that, the model weighs just 1.77 kg and it also doesn’t lack elegance given the thickness of the aluminum body of just 18.25 mm.
Single Review, online available, Long, Date: 06/18/2018
Ревю на HP ZBook 15u G5 – ултра мобилна работна станция
Source: Laptop Mag

i5-8550U: Kaby-Lake-Refresh based low power quad-core processor. The four cores are clocked between 1.8 and 4 GHz (Turbo Boost) and support HyperThreading. The integrated GPU is clocked between 300 and 1,150 MHz. The SoC is manufactured in a 14nm+ FinFET process.» Further information can be found in our Comparison of Mobile Processsors.