Reviews for the HP TouchSmart tm2-1010ea

With the recent surge in the popularity of tablets thanks to the Apple iPad, you would expect the variety of tablet-laptops to have increased as well. Unfortunately, this is not yet the case. Here in the UK at least, the only easily available, sub-£1,000 options for a convertible tablet are the Packard Bell Butterfly Touch and Acer Aspire 1825 – and of course HP's TouchSmart tm2, which we're looking at today.
Single Review, online available, Short, Date: 11/09/2010
Rating: Total score: 70% price: 80% performance: 60%
66% HP TouchSmart tm2-1010ea review
Source: CNet

The HP TouchSmart tm2-1010ea tries to be both a tablet and laptop, but it ends up falling between two stools. Unless you're dead set on owning a swivelling, convertible machine, we'd recommend you opt for a more powerful laptop, such as the cheap, 17.3-inch Samsung R730, which will better serve your media needs. On the other hand, if you're sure you want a tablet, the tm2-1010ea probably isn't what you're looking for, because it's fairly heavy and the touchscreen interface is slightly too clunky.
Single Review, online available, Medium, Date: 06/17/2010
Rating: Total score: 66%
70% HP TouchSmart tm2-1010ea review
Source: Techradar

With a strong range of touch software installed as standard, the HP TouchSmart tm2-1010ea has a sharp and well supported touchscreen display. Its solid build, incredible portability and impressive features round off this strong contender, making it a worthy award winner.
Single Review, online available, Short, Date: 05/27/2010
Rating: Total score: 70%

ATI Mobility Radeon HD 4550: The HD 4550 is a faster clocked HD 4530 and therefore entry level graphics card. It was substituted by the HD 5430 with the same clock rates.

68.67%: This rating is bad. Most notebooks are better rated. This is not a recommendation for purchase. 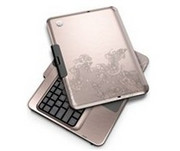