HP's 2000 laptop isn't necessarily a bad laptop but it doesn't really have much to set it apart from other laptops in the $400 price range. In terms of features, the only real distinguishing feature it has over the competition is a high resolution webcam. Beyond this, it is pretty much what one can find in almost any laptop at this price point.
Single Review, online available, Short, Date: 10/22/2012
Rating: Total score: 40%

Before anyone scoffs at the specs of the HP 2000 notebook, it is important to note that this is a laptop that is catering to the budget market - the affordable machine that will either be the first laptop for a lot of users or the machine to buy when on a tight budget. Well built, which is a huge bonus. The excellent keyboard is the proverbial cherry on the proverbial cake. Performance is fairly acceptable, but the battery life is expectedly disappointing. On a budget, this is a laptop to consider.
Single Review, online available, Medium, Date: 06/19/2013
Rating: Total score: 70% price: 80% performance: 60% features: 60% workmanship: 70%
60% HP 2000-2202TU Review
Source: Tech2.in.com

At Rs 30,467, the HP 2000-2202TU is one of the most affordable Core i3-powered laptops that come pre-installed with Windows 8. It packs good punch for its configuration, but we recommend adding 2GB RAM for optimal performance, which will set you back about Rs 900. If you already have a Windows license or plan to install Linux, you can opt for HP 2000-2201TU, which is the DOS variant with exactly the same set of hardware costing around Rs 3,000 less. Some of the other options within the same price range are Toshiba Satellite C840-I4010, Acer Gateway NE56R and Fujitsu Lifebook AH532—do consider these if you’re planning to buy an entry-level laptop.
Single Review, online available, Short, Date: 03/09/2013
Rating: Total score: 60%

At just under $300 the HP 2000-2b19wm is certainly affordable. But even though it provides adequate horsepower for Web browsing and emailing you'll have to be patient while it struggles with more demanding productivity and multimedia encoding tasks. As with the Toshiba Satellite C855D-S5104, the HP 2000 offers better than average battery life but comes up short in terms of features. If you can live with a slightly shorter battery life, our Editors' Choice, the Dell Inspiron 15 (I15RV-6190BLK) offers much better performance and comes with a larger hard drive, Bluetooth networking, and USB 3.0 technology.
Single Review, online available, Very Short, Date: 08/08/2013
Rating: Total score: 60%

58%: Such a bad rating is rare. There exist hardly any notebooks, which are rated worse.» Further information can be found in our Notebook Purchase Guide. 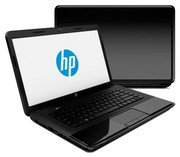