Reviews for the Fujitsu Lifebook SH771

Despite the fact that we haven’t seen them hit the kind of price points promised when we first heard about Ultrabooks, they offer thin and light performance at prices comparable to ‘standard’ laptops.
Single Review, online available, Very Short, Date: 05/11/2012

There is a lot to like about Fujitsu’s SH771, which likely would have scored higher a mere six months ago. However Intel has since shifted the goalposts for what we expect from mobile computing. Despite the fact that the SH771 shows that a real Core i5 will perform a bit better, it just doesn’t deal with the delicate balance of performance, price and form factor as well as Ultrabooks do. It is a good laptop, but it costs too much and delivers too little for the pricetag.
Single Review, online available, Very Short, Date: 05/07/2012
Rating: Total score: 67% price: 50% performance: 67% features: 63%
80% Fujitsu Lifebook SH771 - Strictly Business
Source: Hardware Zone

If there is a company that could make a machine that often surprises us with machines that are worth more than the sum of their parts, it would be Fujitsu. We mean it both literally and figuratively. Fujitsu has always produced personal computers that we feel are really expensive. You would often find consumers on a budget would simply skim over the specs and move on to something friendlier to their wallet.
Single Review, online available, Long, Date: 12/05/2011
Rating: Total score: 80% price: 80% performance: 80% mobility: 90% 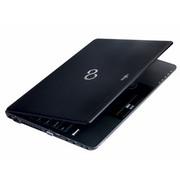 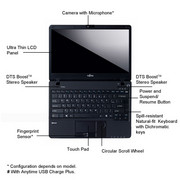