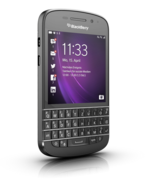 Reviews for the BlackBerry Q10

89% Review BlackBerry Q10 Smartphone | Notebookcheck
Back to its roots. BlackBerry has successfully launched the vanguard of its new OS Blackberry 10 with the Z10 model. Now the Canadian manufacturer introduces the Q10 - a purebred business smartphone. The hardware is largely identical, but the Q10 wants to impress with a physical QWERTY keyboard and a 3.1-inch touchscreen. So, is this new blackberry mix tasty?
Video: BlackBerry Q10 review - physical qwerty keyboard phone is far from cheap
Source: Tech Advisor

BlackBerry's Q10 is filled with many creative features but its ultimate success will come down to one basic question: Do you want a qwerty device? I don't think the era of the qwerty is over, since I have met users who prefer a physical keyboard. But they are in the definite minority. What Q10 users will get with the new smartphone is a distinctive-looking device with a vivid display, an easy-to-use physical keyboard and touchscreen interface and an inventive approach to user security and management. In the most optimistic scenario, BlackBerry's Q10 sales will out-do its Z10 sales, which BlackBerry claims have gone well, critics notwithstanding. If BlackBerry can continue to attract developers to build more apps for BlackBerry World and if BlackBerry can propel its Messenger app into a fuller social networking experience, then there is some basis for believing BlackBerry has a solid long-term future, well above its current 5% global smartphone market share. Just about everything -- hardware to software -- in the Q10 (and the Z10) is good, but the market is crowded with great products that will make BlackBerry's marketing more vital than ever.
Single Review, online available, Short, Date: 08/27/2013
Rating: Total score: 70% price: 70% performance: 60% features: 70% workmanship: 80%
BlackBerry Q10 vs BlackBerry Q5 head-to-head review
Source: V3.co.uk

We expected the more expensive BlackBerry Q10 to put its cheaper sibling to shame in pretty much every category. However, having compared the two, we found the two smartphones fairly evenly matched, raising the question as to whether the BlackBerry Q10 is worth the extra £200. Aside from those considerations, however, we found that the BlackBerry Q5 does a good job for its price, matching the BlackBerry Q10 with regard to screen, performance, operating system and all-round usability.
Comparison, online available, Medium, Date: 07/16/2013

The BlackBerry Q10 is undoubtedly a worthy successor to their previous flagship, the Bold 9900. It’s faster, has a better screen, great battery life and better camera. And BB10 is really fun to use once you get the hang of it. However, the brakes slam on very hard when the asking price is a whopping Rs 44,900. That’s even more expensive than BB’s own Z10! We can’t seem to figure out BlackBerry’s method to this madness. BBM will soon no longer be exclusive to BB devices as the plan is to roll it out as a free app to Android and iOS, hopefully, with all the features. So the only truly unique feature of the Q10 is the keyboard, and that’s certainly not worth the asking price. Our other niggles with the handset was the lack of FM Radio, adding media files the ‘right way’ can be a chore and the fact that the app store is still a long way from reaching the likes of the competition. Our biggest issue is the price, of course, which makes it very difficult to recommend.
Single Review, online available, Medium, Date: 07/02/2013
Rating: Total score: 65%
BlackBerry Q10 Review
Source: Ubergizmo English

As for iOS and Android users, I still feel like there isn’t enough in BlackBerry 10 to warrant jumping ship, that is, unless you have been fumbling with a virtual keyboard and have yet to feel comfortable. In that case, I feel the BlackBerry Q10 would be the perfect reason for you to jump into BlackBerry 10 as you’ll be able to perform many of the tasks you could on iOS and Android on this device, although don’t expect the support for BlackBerry World to be as vast as the App Store and Google Play Store.
Single Review, online available, Long, Date: 06/18/2013

I certainly don’t dislike the Q10, but I’m not sure I could go back to a physical keyboard after I’ve been using touchscreen-based keyboards for a few years now. However, the Q10 is still a great device, and it’s definitely the BlackBerry handset to get if you want a physical QWERTY keyboard on your next smartphone. Plus, the Q10 features the best of both worlds: a physical keyboard and a touch screen, which almost seems like too much to ask for, but BlackBerry was like, “No problem.” It’s not a completely solid medley between the two, but it definitely still works out great.
Single Review, online available, Medium, Date: 06/14/2013

The Blackberry Q10 is a great smartphone, and admittedly it's the only device out there for buyers looking for a top-end smartphone with a full QWERTY keyboard. Those thinking about switching from a top-end Android device or an iPhone might not be easily won over by the small screen size and lack of apps, however, and we hesitate to recommend the device to those who are simply contemplating giving it a go.
Single Review, online available, Long, Date: 06/13/2013
Rating: Total score: 80%
Review: BlackBerry Q10
Source: Reg Hardware

In a nutshell, the Q10 delivers everything RIM should have offered three years ago. I was surprised how much I got along with it. For all its quirks, the Q10 deserves high marks for ease of use and performance. The design and pricing are clearly high end, and it is intended to compete with the latest and greatest full touch devices on £35-£40 contracts. Yet people looking for a more practical device with a clear utility aren't well-catered for today. Not everybody wants or needs glitzy, high-spec techno porn. Nokia has recognised that need and I imagine with future models, BlackBerry can pull off the same trick. As it is, the Q10 offers a lot of convenience.
Single Review, online available, Long, Date: 05/13/2013

Problem is, that group is also a shrinking one, and what were previously the inescapable advantages of a QWERTY device – like unsurpassed typing accuracy – are no longer so clean-cut. Typing on the BlackBerry keyboard is great, but then so is typing on the Z10′s clever software keyboard, and indeed most other modern smartphones. That leaves the Q10 feeling a lot like a sop to keep the old-school users happy, while the rest of the market goes in a different direction. If you’re wedded to keys then the Q10 is the BlackBerry – and potentially the smartphone, period – for you, but for the everyone else it’s more like proof that the days of physical keyboards are behind us.
Single Review, online available, Medium, Date: 05/11/2013

60% Review: The BlackBerry Q10 has a nice keyboard but falls short everywhere else
Source: TechHive.com

The Q10 services a very specific need, and we'll see whether that’s enough to keep it relevant. If you’ve held off purchasing a new phone to find one with a physical keyboard, the BlackBerry Q10 is probably the best of a dwindling number of options. On the other hand, with the Q10 retailing at $250 with a two-year contract—more than the cost of a new iPhone or Windows Phone—I’d give it a pass. Despite the keyboard, app support is tepid, and there are better and more affordable phones on the market.
Single Review, online available, Short, Date: 05/08/2013
Rating: Total score: 60%
80% BlackBerry Q10 review
Source: It Pro

After waiting three months, BlackBerry fans can get their hands on the Q10, which packs the traditional physical keyboard. The BlackBerry Q10 is the best handset the Canadian firm has ever built. BlackBerry 10 as a platform also has all the makings of being truly superb mobile OS, with an already great selection of apps, excellent developer tools, and stringent security.
Single Review, online available, Medium, Date: 05/07/2013
Rating: Total score: 80%
80% BlackBerry Q10 Review
Source: Stuff TV

In some ways, it’s easy to call the BlackBerry Q10 dead on arrival. With a comparatively microscopic screen that makes videos an eye-squinting chore and an app store sorely lacking, it’s a wonder why anyone would want one. Especially when comparing its £530 price tag to that of the £280 Nexus 4, £580 Samsung Galaxy S4 and £510 HTC One.
Single Review, online available, Medium, Date: 05/01/2013
Rating: Total score: 80%
80% BlackBerry Q10 review
Source: V3.co.uk

For those looking for a high-end smartphone with a physical keyboard, there really is no better choice on the market right now than the BlackBerry Q10. While businesses may want to hold off until the BlackBerry 10 ecosystem grows, the Q10 is great for those who have been hunting for a decent Qwerty phone. to add to that, not only does it have a great keyboard, it also has an excellent battery life and ample storage.
Single Review, online available, Medium, Date: 04/24/2013
Rating: Total score: 80%

S4 Plus MSM8960: High end dual core Soc (Krait cores) including a Adreno 225 GPU.» Further information can be found in our Comparison of Mobile Processsors.

This is one of the smallest diagonal for smartphones.

78.2%: This rating is not convincing. The laptop is evaluated below average, this is not really a recommendation for purchase.