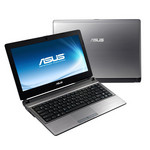 Reviews for the Asus U32U

Its excellent battery life and compact size make the Asus U32U a great option for users who are often out and about and who don't need huge amounts of processing power. It's particularly suitable for users looking to take notes, type out documents, watch videos and surf the web away from home.
Single Review, online available, Medium, Date: 05/11/2012
Rating: Total score: 80%
60% Asus U32U Review
Source: Tech2.in.com

The Asus U32U notebook with 8GB of RAM is priced at Rs.34,990. Alternatively, you do get a 2GB model for Rs.30,990 with DOS pre-installed. Anyway, back to this model that we reviewed - it’s quite pricey, because you’re paying quite a bit for the processing power equivalent to a netbook. True, you’re getting more estate space, but that’s about it. The Lenovo Z570 and G570 might be a little more bulkier and may vary slightly with the price, but they’ve got a much faster processor. If the U32U would have been priced around 30k, it would have made for a much better buy. Right now, it’s just a netbook that's a tad expensive with a bigger display. At this price tag, we’d recommend you consider the other options.
Single Review, online available, Short, Date: 02/07/2012
Rating: Total score: 60%

Asus is known for their different kind of market approach. They were the first ones to introduce the Netbook concept to the world with their Eee PC and that went real well. Little did we all realize, netbooks were slowly being replaced with tablets and so, the idea of cheap and small-underpowered laptops itself doesn’t attract many anymore. With the introduction of the Ultrabook by Intel in 2011, manufacturers could once again explore the ultra-portable category and many did exactly that. In fact Asus themselves released their own versions of the Ultrabook called the Zenbook and that was great.

However, it seems like Asus wasn’t happy with the type of customers the Ultrabooks were aiming at. These “Macbook Air killers” were just another MacBook Air. Ultrabooks are generally as costly as the MacBook Air which limits their sales. Hence, Asus decided they needed to sell something cheaper with a slight taste of an Ultrabook. The U32U then is supposed to be an Ultrabook priced like a netbook. We liked the idea of a cheaper, portable laptop with regular performance but there is one major flaw with their idea. The Asus U32U is powered by a dual-core AMD E-450 processor which they claim is better than Intel’s Atom processor. The fact is; it still is a Netbook’s processor and performs like one. Apart from that, it looks slightly big for its 13 inch screen. At one look, you’d say it is a 14 inch laptop. In a nutshell then, the U32U is a not a perfect combination of a Netbook and an Ultrabook. It’s almost as thin and portable as an Ultrabook but performs like a netbook. The only advantage is its long battery life and modest looks.

Integrated graphics card in the Zacate netbook processors (e.g. E-450) featuring an UVD3 video decoder and no dedicated memory. Thanks to TurboCore, it can automatically overclock to 600 MHz.

Dual Core low power processor with an integrated graphics cards. The processor is on a level with Celeron SU2300 (1.2 GHz) and the GPU part about as fast as an Nvidia ION (2).