Performance-wise there is nothing unexpected. Our unit managed to extract the most out of the Core i7-9750H and it still had some headroom (in our opinion) for the Core i9-9880H. Add the RTX 2070 to the mixture and you get a pretty capable device. However, it’s worth noting that the laptop was pretty noisy under load, unlike the HP Omen 17 2019, but it appears to be a trait to the ROG Strix gaming laptops. Well, if we have to be completely honest, the HP Omen 17 2019 and the MSI GE75 Raider produced a lot higher framerates than the ROG Strix G731. Should you buy it, though? Well, if you’re okay with the noisy nature of the device, and by the way the speakers on this notebook are stunning, so they might compensate for that. However, we couldn’t forgive it the fact that it lacks an SD card reader and Thunderbolt support on the Type-C port.
Single Review, online available, Very Long, Date: 06/23/2019

Model: Asus’s collaboration with the globally renowned BMW Designworks Group has inspired the upbringing of the ROG Strix G laptop model. It is the perfect example of how far technological advancements have come and the constant need for improvement looms forevermore in order to appease the hearts of men in this innovative era. In an effort to keep up and stay relevant within the gaming scene, the Asus ROG Strix G presented itself as an exemplary benchmark in the gaming community for packaging an all-encompassing standardization of high-end specifications, which can guarantee the most optimal of elite gaming experience at a very fair price. The all-encompassing high-end specification in question includes, but is not limited to, an astounding GeForce GTX 1660Ti graphics card and an expansive 16 GB sized DDR4-2666 RAM. These two components create a powerful combination, which can sustain the most burdensome and intense of modern Triple A (AAA) games. With impressive visuals to boot, the collective efforts of these components alone are backed with real-time ray-tracing technology catered by the exceptional NVIDIA Turing architecture. The melding of realistic and lifelike reflections as well as shadows on high-tuned graphics will not only sweep users off their feet, but also enables them to personally experience the grandeur of the world creation through the impressive technology of real-time ray-tracing.

The Asus ROG Strix G comes in two distinctly similar models but of different measurement in length. Users can opt for the standard 15-inch experience without forgoing any of the fantastic features mentioned beforehand, but in order to live through a more immersive and larger-than-life experience, the 17-inch option is definitely worth the price point. It is to be noted that the inspirational physical design of the Asus ROG Strix G is not merely for aesthetic purpose alone, but also serves as a functional catalyst to facilitate the various features that come with the device. For example, the contrasting brushed finishes on the lid create an asymmetrical cut-out, which paves way to unrestricted airflow around the rear end of the device. This subtle but well-ventilated exterior works in great tandem with the ROG Strix G’s Intelligent Cooling system. This Intelligent Cooling system is armed with Dual N-Blade 12V hyper-fans to increase airflow and ultra-thin fins to disperse heat into an expanded surface area. In addition, it also houses a self-cleaning thermal module, which ejects dust from clogging up the precious interior of the device. The ROG Armoury Crate software operates on a routine basis between different modes in order to optimize performance and acoustics for tasks in general.

NVIDIA GeForce GTX 1660 Ti (Laptop): Mid range dedicated graphics card for laptops based on the desktop GTX 1660 Ti and therefore the Turing architecture without raytracing and Tensor cores. The performance of the Max-P variant should be similar to an older GTX 1070.

9750H: On Coffee Lake architecture based processor for big and heavy laptops. Integrates six processor cores clocked at 2.6 - 4.5 GHz (4 GHz with 6 cores) that support HyperThreading. Manufactured in an improved 14nm process (14nm++). » Further information can be found in our Comparison of Mobile Processsors. 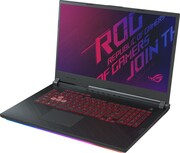 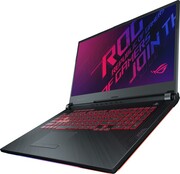