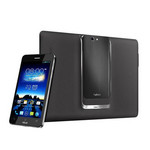 Reviews for the Asus PadFone Infinity

The convertible phone goes full HD and beyond
Source: Engadget

The PadFone Infinity is without a doubt the best phone ASUS has ever made, and it's a worthwhile upgrade from the PadFone 2 even for the specs alone. Thanks to that brand-new industrial design on the phone itself, we're confident that it'll get more attention than its two predecessors did. Pretty much everyone we've shown the device to praised the new look.
Review Type Unknown, online available, Length Unknown, Date: 05/21/2013

The Asus PadFone Infinity is a phone-in-tablet device, which is an idea that never really caught on. The phone uses Android 4.2.2 Jellybean, which gives simple and clean icons. The processor also underwent an upgrade to the Qualcomm Snapdragon 800 quad core with a clock rate of 2.2 GHz. Paired with 2 GB of RAM, the Asus PadFone Infinity will run smoothly and users will not experience much lags.

The 5-inch screen has a resolution of 1920 by 1080 pixels (FullHD), similar to most of its direct competitors. With a Super IPS screen and 441 ppi pixel density, the colors are crisp and bright. The 13 MP camera is also a great addition that allows users to take good pictures. The Asus PadFone Infinity now supports expandable storage in the form of micro-SD cards with 16 GB of internal storage.

As for connectivity, the Asus PadFone Infinity supports Bluetooth 4.0 and Wi-Fi 802.11 a/b/g/n making wireless connectivity a breeze. It also supports GSM, HSDPA and 4G LTE further boosting its connectivity. Unfortunately, the battery life is rather low. With battery capacity of only 2400 mAh, it is lower than direct rivals'.

All in all, the Asus PadFone Infinity is a good device all-around. However, with the increasing number of competitors, Asus has to step up its game if it wishes to be one of the top dogs.

91.5%: There do not exist many models, which are rated better. The most ratings get ratings, which are a bit worse.