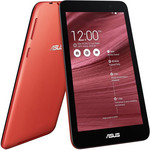 The Asus Memo Pad 7 is an amazing high-end tablet with great features, like the intel atom processor and the elegant design. It comes with many customizable options whether for audio or display, so you'd feel the tablet really makes things easier for you.
Single Review, online available, Very Short, Date: 02/27/2015

Asus should have opted for a better name for Memo Pad 7 ME752C that sets it apart from the rest of the company's tablets, because on paper and in real life the slate is truly impressive. The beautiful screen is its key selling point and it is simply a pleasure to behold. This 7 incher is sharp, bright, with great viewing angles and accurate colors, which you can even tweak if you feel like it.
Single Review, online available, Very Long, Date: 02/11/2015

Overall, I’m pretty impressed with the tablet, with the exception of the inconsistent Wi-Fi performance. Since there are little or no successors to the 2013 Nexus 7, the MeMo Pad 7 ME572 seems like the best fit for a budget, mid-range performance 7” tablet.
Single Review, online available, Short, Date: 01/19/2015
Rating: Total score: 80%
90% Asus MeMO Pad 7 (ME572C) Review: In Depth
Source: Recombu

The Asus MeMO Pad 7 ME572C is one of our favourite affordable Android tablets of recent times. Families will get more from the Hudl 2, with its excellent family features, but the MeMO Pad is great for anyone wanting to stay productive as well as entertained on the move.
Single Review, online available, Very Short, Date: 01/16/2015
Rating: Total score: 90%
80% Asus MeMoPad 7 ME572C review
Source: Techradar

The Asus MeMoPad 7 ME572C is an incremental upgrade from the Google Nexus 7 by Asus that steps up the necessary components while keeping everything else largely the same. In terms of price, it's not the best deal out there but it is a solid contender. If you can look past Asus' slew of pre-installed apps it's one of the best 7-inch tablets you'll find around at the moment.
Single Review, online available, Medium, Date: 01/12/2015
Rating: Total score: 80%
80% Asus MeMO Pad 7 ME572C review
Source: Trusted Reviews

Just as the Nexus 7 is old but still good, the Asus MeMO Pad 7 ME572C seems late, but still solid. It’s a 7-inch tablet when 8-inch models are suddenly becoming popular, and doesn’t reach anywhere near the budget pricing of something like the Tesco Hudl 2. This is the tablet we were longing for back in late 2013. All this time later, the Asus MeMO Pad 7 ME572C isn’t the value king it could have been, but ticks the display, performance and battery life boxes in style.
Single Review, online available, Medium, Date: 10/24/2014
Rating: Total score: 80% price: 70% performance: 80% features: 70% display: 80% mobility: 80% workmanship: 70%

Model: The Asus MeMO Pad 7 ME572C is a stylish 7 inch tablet which comes in three colors to choose from: Rose Champagne, Gentle Black and Burgundy Red. The chassis of this tablet has black rubberized metallic edges, which makes it seamless to grip.The lightweight device only weighs in at 269 g and is only 8.3 mm thick. The capacitive touchscreen is capable of displaying 16M colors with a resolution of 1200 x 1920 pixels. On top of that, it supports multi-touch input with up to 10 fingers.

The Memo Pad 7 runs on Android OS KitKat and is powered by an Intel Atom chipset with a 1.83 GHz quad core CPU and 2 GB of RAM. There is an option of 16 GB or 32 GB for internal memory on top of the micro SD card slot which supports up to 128 GB. There are a 5 MP primary camera with with autofocus and face recognition and a 2 MP front camera. No cellular connectivity is available for this tablet hence communications are all through Wi-Fi and Bluetooth. Battery life on this Asus tablet is fairly decent with the ability to handle 8 hours of usage effortlessly. As a verdict, the Asus MeMO Pad 7 ME572C is a suitable alternative to full size tablets.