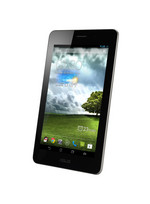 Reviews for the Asus Fonepad

For a small business looking for well priced Android device with 3G and a good, large screen while sacrificing some portability, the Fonepad isn't a bad choice. At the same time however, a Wi-Fi only tablet, 7 or 10", and a smaller mobile phone running a hot spot to share 3G or 4G is probably a more elegant choice.
Single Review, online available, Short, Date: 05/20/2013

What will be our final decision for Fonepad is hard to say. Beside typical tablet usage it focuses on voice calls, which we found awkward when we tried to use it as a typical phone leaning it on ear. Poor voice quality doesn’t help the case, so our recommendation is the use of a Bluetooth headset. In the future, we would also like to see an accessory which will act as a dumb phone (form vise also) and via Bluetooth connect to Fonepad.
Single Review, online available, Medium, Date: 05/15/2013

Z2420: Low-end single-core Soc for smartphones and tablets.» Further information can be found in our Comparison of Mobile Processsors.

77.75%: This rating is not convincing. The laptop is evaluated below average, this is not really a recommendation for purchase.