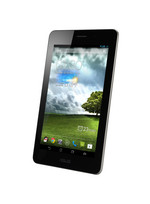 86% Review Asus Fonepad ME371MG Tablet | Notebookcheck
Like a brick on your ear. Samsung's Note kicked off the ongoing wave of large smartphones, aka phablets. Now, Asus joins in with its big 7-inch Fonepad, nominally a tablet to make phone calls. It will definitely attract attention when held to an ear - at least at present.
ASUS Fonepad Review
Source: Ubergizmo English

Putting this gimmick aside, the Fonepad is certainly a capable budget-friendly Android tablet as it performs adequately across all of our tests, and even exceeding our expectations in its battery and entertainment performance as well as the ASUS-specific applications thrown into the mix. Unfortunately, there are better 7-inch tablets on the market and for cheaper, such as the Nexus 7. If you for some reason need a tablet that can double as a phone, then your only choice right now is the ASUS Fonepad. But if you’re just looking for an Android tablet that costs below $300, we think you should take a look at the Nexus 7, Galaxy Note 8 and the Amazon Kindle Fire HD as they can offer you a much better experience than the Fonepad can.
Single Review, online available, Long, Date: 06/14/2013
Review: Asus FonePad. You may feel a bit of a spanner
Source: Reg Hardware

So, can you live with a 7-inch, 340g smartphone? Yes. Naturally there are compromises to be made. I wouldn't want to take a FonePad with me to my local pub for the evening or to a gig, and the absence of a suitable camera is going to become an issue at some point down the line. But the cash savings and the sheer convenience of having one device rather than two to carry and charge does have its attractions. I’m all for affordability and versatility, and the FonePad delivers both in spades. Which makes it the one of the very few budget tablets - the other being the Nexus 7 - I’d recommend to a friend.
Single Review, online available, Medium, Date: 06/12/2013

For those genuinely interested in a phablet, the Asus Fonepad is a bit of a bargain. It does the job of two devices for a budget price. However, you'll need to be prepared to make sacrifices including practicality and, in this case, no rear camera and slower performance issues. Not to mention the inevitable Dom Jolly impression, should you decide to use as a phone without a separate earpiece.
Single Review, online available, Short, Date: 06/04/2013
Rating: Total score: 70% price: 80% performance: 60% features: 70% workmanship: 80%
70% Asus Fonepad Review
Source: Think Digit

The Asus Fonepad is a direct competitor to the Samsung Galaxy Tab 2 (and also the upcoming Tab 3). The tablet has some pretty interesting features such as Floating Apps, has the ability to playback video smoothly, make calls and a great build. On the downside, it is plagued with a bit of lag and the rear camera is poor. At 8GB, the built-in storage isn’t great either. If you are looking for a tablet around the Rs. 15k price point, you can definitely consider this device along with the Galaxy Tab 2. If you are on a tighter budget (10K) you can take a look at the iberry Auxus CoreX2 3G tablet as well.
Single Review, online available, Medium, Date: 05/21/2013
Rating: Total score: 70% price: 60% performance: 60% features: 70% workmanship: 80%
60% Asus Fonepad review
Source: It Pro

The Asus Fonepad is yet another smartphone/tablet hybrid which aims to attract users who want to carry around one device. The 7in device functions primarily as a tablet, has a built-in SIM which allows users to calls, send texts and browse the internet. The Asus Fonepad is good value for money considering its a a tablet which makes phone calls, but it is likely to be too cumbersome for most people.
Single Review, online available, Medium, Date: 05/08/2013
Rating: Total score: 60%
75% Asus FonePad Review
Source: Tech2.in.com

The Asus FonePad is priced at Rs 15,999 for the 8GB version, which is a pretty good deal. We would even go as far as saying the FonePad offers more value for money than the similarly-priced Nexus 7. Apart from not receiving updates instantly and the lack of a powerful processor, the FonePad does everything the Nexus 7 does and more. It can run almost any app (albeit heavy apps like 3D games won’t run as well), has a pleasing and functional skin, similar battery life, plays Full HD videos, boasts of expandable storage and it doubles up as a phone. The camera is still a bit woeful although we do appreciate the inclusion of it and the fact that it’s auto-focus. The only major downside that we came across is the fact that it can get a little sluggish now and then. Between this and the Samsung Galaxy Tab 2, we’d recommend the Asus FonePad for its higher resolution screen, (relatively) better auto-focus camera and better battery life.
Single Review, online available, Short, Date: 05/08/2013
Rating: Total score: 75%
83% Asus Fonepad review
Source: PC Pro

The Fonepad does have some weaknesses, not least the fact that you'll have to wait on Asus for OS updates – with the Nexus 7, you get the latest version of Android as it's released. It isn't wonderfully practical to use as your everyday smartphone, either. But, even if you think the phone capabilities are little more than a daft frivolity, there's no denying the Fonepad packs a hell of punch for a budget tablet. It's good enough, even, to elbow aside the iPad mini at the top of our A-List.
Single Review, online available, Short, Date: 04/30/2013
Rating: Total score: 83% price: 100% performance: 67% features: 83% workmanship: 83%

Z2420: Low-end single-core Soc for smartphones and tablets.» Further information can be found in our Comparison of Mobile Processsors.

75.33%: This rating is not convincing. The laptop is evaluated below average, this is not really a recommendation for purchase.