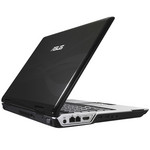 Reviews for the Asus F80

While I would love to give this notebook a four star rating, the battery life simply killed it for me. The number one thing a laptop has to be is portable. This one dies before you can really get started working on anything. You can't watch more than half a movie without having to plug it in and this is with it in a power saving mode.
Single Review, online available, Medium, Date: 12/14/2011
Rating: Total score: 40%

ATI Mobility Radeon HD 3470: Faster clocked HD 3450 and successor of the HD 2400 XT but with DirectX 10.1 and due to the new 55nm process, higher clockspeeds. Avivo HD video functions allow the decoding of HD videos.

T5850: Merom based Core 2 Duo entry level dual core processor on the performance level of a Core 2 Duo T6500.» Further information can be found in our Comparison of Mobile Processsors.