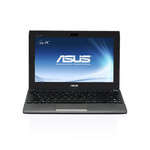 The last of a dying breed, the ASUS Eee PC 1025C Flare demonstrates why tablets have superceded netbooks as the lightweight computing device of choice -- pound for pound, slates offer faster performance, sleeker designs and more intuitive touch interfaces. Still, if you're in the market for a compact laptop that costs a third of the price of an Ultrabook, the Eee PC 1025C is worth a look. It can handle basic tasks with ease, weighs only 2.4 pounds and lasts more than three hours longer on the charge than the average netbook. Not bad for a laptop that costs less than $300.
Single Review, online available, Short, Date: 03/14/2012
Rating: Total score: 60%
60% Asus Eee PC 1025C Flare
Source: CNet

Once upon a time, cheap, tiny laptops ruled the land, acting as travel, backup, and kids' computers to millions, and completely upending what consumers expected to pay for a PC. Asus brought Netbooks into the world, and with the last-gasp Eee PC 1025C Flare, it looks like it's going to take them out as well.
Single Review, online available, Medium, Date: 03/13/2012
Rating: Total score: 60% performance: 40% mobility: 90%
Asus EEE PC 1025C review – solid 10 netbook for every buyer
Source: Netbooklive

As I’ve mentioned at the beginning of this review, the 1025C is going to be Asus’s work-horse in the netbooks’ segment in 2012. It brings most of the features Asus can squeeze on these machines, a latest generation hardware platform and a good overall price, although I’m sure others will be able to beat it for on-par configurations (and yes, I’m thinking about Acer, with their D270 Aspire One).
Single Review, online available, Short, Date: 02/23/2012

Asus came out with the first netbook about four years ago and from they have been leading the market in that category. However, it has come to a time in which consumers do no longer need a cheap, tiny laptop as travelling companion. Tablets and smartphones now play the role of these mini laptops.

Asus is still pushing the netbook category with one of the lasts of its kind, the Eee PC 1025. It is an improved version of the older and slower netbooks that ran on single core processors. One could say that this is the second generation of netbooks but that’s as far as it goes. Even with a dual core Intel Atom processor and 2 GB of RAM, the Eee PC 1025 still feels slow and laggy.

That’s just half as bad as the exterior quality. The entire chassis is made of plastic and feels like it could break apart with the slightest fall. Even keyboard and touchpad are a huge let down. The touchpad is made of the same material as the interior chassis and it isn’t smooth enough. The keyboard is too small and the key travel is too short. As a result, it can be really hard to get any typing job done on it. Suddenly, a touch screen keyboard doesn’t seem so bad anymore.

The 10.1-inch matte screen isn’t that bad outdoors but truly isn’t made for your multimedia needs. That’s one of the main points though, if you’re looking at a 10 inch multimedia device, any tablet out there will do the job for you with at the same amount of money. If it is an ultraportable laptop that you’re looking for, ultrabooks already do the job perfectly but at much higher price. The good parts about the Eee PC 0125 are its battery life and selling price. Hence, the only reason to get this netbook is if for some reason you need a cheap windows based, portable laptop that has a long battery life. 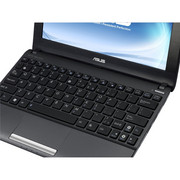 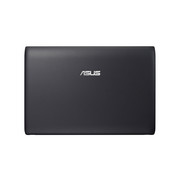 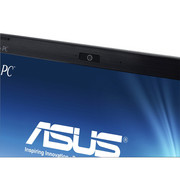