Acer may have been one of the first to the market with a low cost tablet to feature the full Windows operating system but being first isn't always the best. The tablet offers middling performance due to an older processor which exhibits lag in space. The big problem though is the display that is frankly subpar in such a competitive market.
Single Review, online available, Long, Date: 11/11/2013
Rating: Total score: 40%
82% Acer Iconia W3-810 (WLAN, 64 GB)
Source: Star Techcentral - Heft 12/2013

If you're a sys admin or sales type that needs networking programs or Windows-based x86 programs to get your job done, the Acer Iconia W3 is temptingly hyper-portable and affordable. Once you've installed your Windows programs and finished with the bevy of initial Windows updates, speed is tolerable for MS Office, web-based database access and even some light photo editing.
Single Review, online available, Medium, Date: 08/01/2013
Rating: Total score: 70%
60% Acer Iconia W3 Review
Source: Ubergizmo English

Being the first 8-inch Windows 8 tablet means Acer has set a precedent not only to itself but to other companies who want to deliver the same kind of device in the future. The Acer Iconia W3 may not be the best Windows 8 tablet out there, but seeing how it’s the only 8-inch tablet available, it’s pretty much your only option if you’re looking for a device like this.
Single Review, online available, Long, Date: 07/18/2013
Rating: Total score: 60%
Acer Iconia W3: The first 8-inch Windows 8 Pro tablet
Source: Reg Hardware

And the Acer Iconia W3 is only the first such device to hit the market. As other vendors follow suit, it will be interesting to see if they can produce small Windows 8 devices that feel a little more high-end than what Acer has delivered. But even if they do, most users will probably find Windows 8 simply too frustrating on a tiny screen for such small devices to reach a mass audience. If Microsoft is hoping that smaller displays would reverse Windows' fortunes in the tablet market, I strongly suspect it's in for another disappointment.
Single Review, online available, Long, Date: 07/10/2013

what's it like using Windows on an 8-inch tablet
Source: Engadget

It's sort of hard to believe, but the first sub-10-inch Windows 8 tablet only just went on sale two weeks ago. For the time being, at least, the Acer Iconia W3 isn't just the best small-screened Windows 8 tablet; it's your only option. Even if there were more to choose from, though, the W3 has a few things to recommend in its own right.
Single Review, online available, Long, Date: 07/10/2013

At best, the Iconia W3 proves Windows 8.1 can run smoothly and for a respectable duration on a compact tablet. We can only hope there’s more attractive hardware to come, though, because the W3 doesn’t have anything like the quality to justify its premium £330 price tag.
Single Review, online available, Very Short, Date: 07/05/2013
Rating: Total score: 50% price: 33% performance: 83% features: 67% workmanship: 67%
Acer Iconia W3 Review
Source: Slashgear

It’s difficult to judge this tablet as a competitor with any other similar solution since it basically stands alone in the field right this minute. While Acer has brought forth a relatively decent effort in the 10.1-inch space for tablets with the transforming Acer Iconia W510, it’s here that the company goes all-in with a stand-alone mini-tablet effort for Windows 8 at last. While we’ve yet to see any company bring the full-powered mini-tablet with high-definition display to Windows 8 that we desire – or at least desire to see – Acer currently leads the pack with this machine.
Single Review, online available, Short, Date: 07/04/2013

The Acer Iconia W3-810 provides a more-than-serviceable Windows 8 experience in a design you can easily take with you. WIth nearly 9 hours of battery life, a free copy of Office 2013 and some helpful Acer software, this tablet can help you do real productivity work and run all of your favorite Windows applications on the go.
Single Review, online available, Long, Date: 06/29/2013
Rating: Total score: 70%
Hands-on: Acer Iconia W3 review
Source: Pocket Lint

With the Iconia W3, its new 8.1-inch Windows 8 tablet, Acer is hoping to put a fully-functioning desktop in the palm of your hand and wipe out the need for the iPad mini or Nexus 7 at the same time. It seems it might well have achieved exactly that. The Iconia W3 comes pre-installed with Microsoft Office Home & Student, boasts 2GB of RAM on the Intel Clovertrail architecture and offers either 32 or 64GB of storage.
Single Review, online available, Short, Date: 06/04/2013

Acer's Iconia tablet series is renowned for mobile tablets with a moderate price tag. The Acer Iconia W3-810 is the latest addition and runs under Windows 8.1. Btw. A "W" in the name of Acer Iconia tablets hints on Windows, while an "A" refers to Android.

The W3-810 features a 8.1 inch screen and an Intel Atom processor and runs the latest Windows 8.1. It comes at the right time to fill a gap and is probably the first windows 8 tablet smaller than 10 inch. So it is light, slim and a good to hold with one hand. The LED-backlit mutli-touch display is sufficient for less demanding customers. Apparently the Acer aims to a productive business tool rather than a multimedia device. It comes with a free copy of Office 2013, which consists of full versions of Word, Excel, PowerPoint and OneNote. In addition is battery life is nearly 9 hours.

Though the keyboard dock is sold separately, it is very much recommended for word processing and punching numbers. A nifty hinge beneath the keyboard allows sliding the tablet in place. It may not be perfect, but it is a solution to carry them both at once. Forgiving the If you do not mind the less impressive audio and visual options, is is a very budget-friendly ultraportable tablet, which is better for work and productivity than all others.

62%: Such a bad rating is rare. There exist hardly any notebooks, which are rated worse. 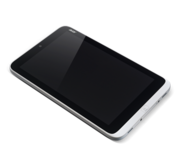 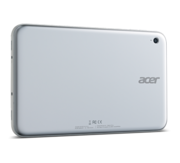 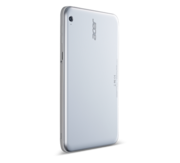