The Acer C720 Chromebook is brimming with features and has appeal for the power Chrome OS user. It's noticeably faster than Celeron-powered Chromebooks and may satisfy those who need a bit more power. However, at $379.99, it's one of the most expensive Chromebooks we're reviewed, though well short of the $1,500 Google Chromebook Pixel. The extra power is welcome, but general users working in Google Docs or simply surfing the Web may not notice the speed bump unless they add lots of extensions to Chrome and expect 20 open tabs to still respond quickly. The HP Chromebook 11 (Verizon LTE) is still our Editors' Choice for Chromebooks with cellular wireless capability and a better IPS screen at a list price that's almost $100 less.
Single Review, online available, Very Short, Date: 09/16/2014
Rating: Total score: 70%
60% Acer C720-3404
Source: Computer Shopper

Chromebooks and the Chrome OS are getting better by the day, or at least the month. (Our time with the Acer included the easiest and most successful time we've had with several offline apps, as well as our first experience with Google Docs' new ability to edit Microsoft Office files without having to upload and convert them first.)
Single Review, online available, Long, Date: 08/07/2014
Rating: Total score: 60%

Users can increase storage space with an SD card. The 11.6 inch Active Matrix TFT Colour LCD uses ComfyView technology. The limitation in screen real-estate is understandable especially since the device weighs only 2.76 lb (1.25 kg) and is only 0.8 inch (2.03 cm) thick. Other features include a webcam, Bluetooth 4.0+HS, 1 USB 3.0 port, 1 USB 2.0 port and HDMI output. The 3-cell lithium polymer battery rated at 3950 mAh can power the Acer C720-3404 Chromebook for at least 8 hours.

4005U: Haswell-based ULV dual-core processor clocked at 1.7 GHz without Turbo Boost support. Offers an integrated HD Graphics 4400 and a dual channel DDR3 memory controller.» Further information can be found in our Comparison of Mobile Processsors. 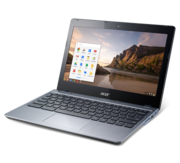 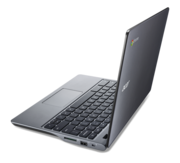 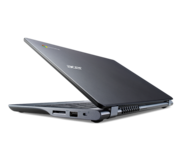 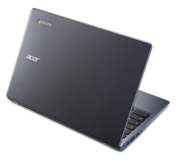 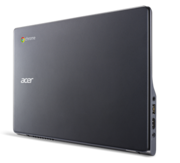