Slim and powerful gaming notebook with a cool feature to spice up things
Source: Laptop Media

The Acer Aspire V17 Nitro Black Edition (VN7-791G) is just as good as its little brother. It has the same premium build quality, thin profile and powerful hardware. The screen is almost the same with just a little bump in the size. The interior is just as comfortable – good keyboard, nice, but sometimes inconsistent touchpad, and red LED backlight. We did notice, however, that the lid bends easily under small pressure due to the fact that the hinges are placed apart and the middle of the screen stands unsupported. Although, this is a minor issue that most people will not even notice.
Single Review, online available, Medium, Date: 04/30/2015 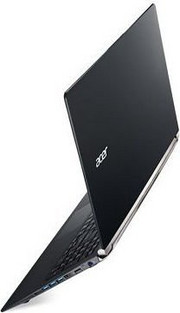