After living with the Acer Aspire 1810T for the past couple of weeks, it's apparent that this budget laptop does indeed live up to the hype. Battery life is outstanding, and the large keyboard also provides usability on par with much bigger machines. Mixing design details and components from more expensive ultra-portable laptops, yet costing the same as many netbooks, it's a genuinely impressive choice for frequent travellers.
Single Review, online available, Medium, Date: 12/07/2009
Rating: Total score: 80% 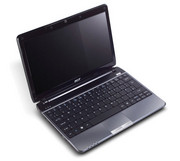