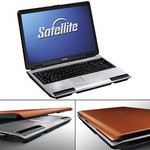 Reviews for the Toshiba Satellite P105-S9330

The Satellite p105-S9330 performed very well across all the tests we subjected it to. Certainly if it had a slightly faster CPU and a faster hard drive it would have scored even better. Then again, its impressive battery life score of nearly three hours is attributable in part to its CPU and 4200 RPM hard drive. The p105 is not a bleeding edge gaming enthused notebook, but it's certainly not underpowered either. Typical casual gamers likely will have few complaints about this Toshiba notebook and it'll also perform well as a regular everyday computing tool too. At a price point of around $2,500 it offers a competitive value considering all the goodies Toshiba jammed in.
ausführlicher Test mit Geräteaufbau und Testwerten und Bildern; online abrufbar

T7200: Mid-range (at the time of annoucement) dual core processor based on the Merom core. » Further information can be found in our Comparison of Mobile Processsors.