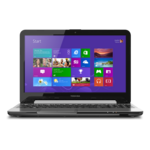 Reviews for the Toshiba Satellite L955D-S5140NR

Archive.org version
Toshiba's Satellite L955D is a thinner and lighter version of their AMD based 15.-inch laptop. Performance does drop by a small amount due to the move to lower voltage parts but on the whole it is better than low voltage Intel options because of its four CPU cores. With extra memory and storage space, it will be very appealing to many.
Single Review, online available, Short, Date: 04/15/2013
Rating: Total score: 60%

AMD Radeon HD 7600G: Processor graphics card that is built into the Trinity A8 ULV series APUs from AMD. Based on the VLIW4 architecture of the Radeon HD 6900 desktop series.