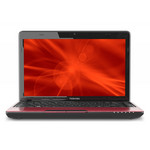 Reviews for the Toshiba Satellite L735-S3220RD

Even though this notebook can be easily carried around during your daily travels, the build quality may jeopardize the lifespan of the notebook in the long run. We found that the display lid quality is the biggest factor here; it's flimsy and bends easily. Another deterrent could be its battery life, we clocked only about 3 and a half hours of mobile run time, whereas some other machines with similar hardware are able to pull four to five hours of battery life. In the end, you simply can't demand perfection at this price range, and we believe the performance, port selection, and keyboard are some of the most important factors when choosing a notebook.
Single Review, online available, Long, Date: 10/13/2011
Rating: Total score: 60% price: 70% performance: 70% features: 60% mobility: 70% ergonomy: 60%
60% Toshiba Satellite L735-S3220RD
Source: PC World

The more you carry the L735-S3220RD, or any L730 series laptop around, the more you'll appreciate Toshiba's smaller, lighter design. It doesn't wear on you as the day progresses, and for most users the smaller screen won't be an issue. If it weren’t for the short battery life and slightly subpar input ergonomics, this laptop would have earned a higher overall rating.
Single Review, online available, Very Short, Date: 09/26/2011
Rating: Total score: 60%
60% Toshiba Satellite L735-S3220RD 13.3-inch Laptop PC
Source: Comp Reviews

For those looking at a media capable 13-inch laptop, the Toshiba Satellite L735-S3220RD offers a surprising value at under $800 equipped with a Blu-ray drive. Performance is also very good thanks to the second generation Core i5 processor. It also offers extra storage space thanks to the larger 640GB hard drive. While all these features are great, there are a few issues with the system.
Single Review, online available, Short, Date: 09/07/2011
Rating: Total score: 60%