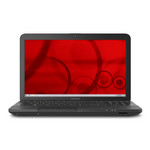 Reviews for the Toshiba Satellite C855D-S5104

At $270, the Toshiba Satellite C855D-S5104 is a decent deal, but it's far from a great deal. Its AMD E-300 processor can't match the performance of similarly priced Intel-based laptops, and it comes up way short in terms of features. If you need a cheap laptop for Web browsing, emailing, and using Facebook, it will fit the bill, However, our Editors' Choice, the Dell Inspiron 15 (I15RV-6190BLK), offers better performance and more features for right around the same price.
Single Review, online available, Short, Date: 08/08/2013
Rating: Total score: 60%

E-300: A low-end dual-core processor designed for the smaller laptops. An E-300 has the relatively fast HD 6310 iGPU.» Further information can be found in our Comparison of Mobile Processsors.