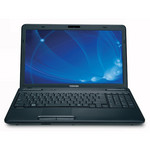 Reviews for the Toshiba Satellite C655D-S5126

There is a lot to consider when looking at a machine like the Toshiba C655D using the AMD E-240 APU including the performance, usability and battery life. We have already shown a basic look at performance and as you should expect with a single-core variant of the Zacate platform, the speed of the machine doesn't quite live up to the expectations we had. Considering we are using a 15.6-in screen with room for a large-ish battery, that is disappointing. However, performance compared to most of the Atom-based netbooks/notebooks will likely paint this Toshiba in a better light.
Single Review, online available, Short, Date: 01/31/2011

E-240: Low power single core processor with an integrated graphics cards. The processor is a about 1/3 faster than a similar clocked Atom processor and the GPU part about as fast as an Nvidia ION (2).» Further information can be found in our Comparison of Mobile Processsors.