Reviews for the Toshiba Satellite A355D-S6930

The Toshiba Satellite A355D-S6930 makes a better impression on paper than it does in actual use. The bulleted list of hardware and features makes it seem like a steal, but the performance numbers and overall functionality are enough to raise some caution flags. If you don't have a lot of cash, and if a nice, big screen and good speakers are enough for you, then check out the A355D. But better options exist, such as Lenovo's IdeaPad Y530, which goes after the exact same demographic as this Toshiba and does a better overall job.
Single Review, online available, Medium, Date: 07/15/2009
Rating: Total score: 70% 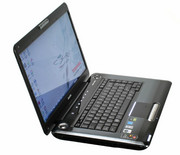