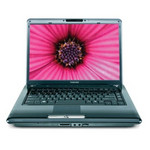 Reviews for the Toshiba Satellite A305D

Toshiba's Satellite brand has long played second-fiddle to the company's excellent Qosmio multimedia systems. But the updated Satellite line has a whole new look and feel, with a shiny metallic sheen and a clever new Sleep-and-Charge feature, which lets you charge USB devices even if the laptop is powered off. Toshiba rolls out its new Satellite look to the basic 15-inch AMD-powered Satellite A305D, but others offer more for the same $999.
5.8 von 10, Leistung mangelhaft
Single Review, online available, Medium, Date: 05/12/2008
Rating: Total score: 58% performance: 50%
Toshiba A305D Review
Source: Notebookreview.com

The AMD-based Toshiba Satellite A305D is built off a good platform that it also shares with the Intel A305, but the small price cut doesn't make up for the huge loss in performance. For saving roughly $200 you go from a capable gaming machine with dual hard drives and an extended battery, to a budget configuration notebook. If the price was about $300 or $400 dollars less than it is now I would be all over it considering how much I love this design, but the retail price of $1,000 is asking way too much.
Display gut, Leistung schlecht
Single Review, online available, Medium, Date: 05/07/2008
Rating: performance: 40% display: 80%

59.5%: Such a bad rating is rare. There exist hardly any notebooks, which are rated worse.