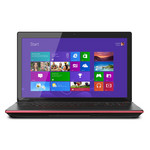 Reviews for the Toshiba Qosmio X75-A7295

The laptop’s biggest failing actually came by way of battery life, which isn’t a big surprise from a machine of this size. In our video rundown test, the Qosmio lasted two hours and 20 minutes. If you’re interested in getting a laptop this large, you’re most likely going to use it as a desktop replacement, thus battery life isn’t really an issue.
Single Review, online available, Medium, Date: 07/24/2014
Rating: Total score: 90%
60% Toshiba Qosmio X75-A7295
Source: Comp Reviews

The Toshiba Qosmio X75-A7295 is a very affordable 17-inch laptop with some impressive 3D and general performance. It is also thinner and lighter than many of the other 17-inch gaming laptops on the market but this comes at the price of a much smaller battery with half the running time. The standout feature of the system though is the very bright and colorful display that is certainly better than most of them on the market.
Single Review, online available, Short, Date: 03/17/2014
Rating: Total score: 60%