Reviews for the Toshiba CB35-A3120 Chromebook

Toshiba Chromebook Review: Best and Worst of Chromebooks in One
Source: Notebooks.com

We gave the Toshiba Chromebook our Best of CES 2014 award. After using it for a couple of weeks, I don’t think we’d do that now. Even though HP released their computer months ago, it remains the best current generation Chromebook available. Until Google launches an updated Chromebook Pixel, the HP beats it too, thanks to a faster processor and longer battery life. We’re excited to see the Samsung Chromebook 2 next month. It may take the crown as the best larger display Chromebook available. The Toshiba certainly didn’t take the prize away.
Single Review, online available, Short, Date: 05/02/2014

The power and quality of the Chromebook continues to grow. They've come to replace Netbooks in terms of the market area they sit and for a certain audience that will be just perfect for their computer needs. Something to write essays on, surf the web, sort your email, or even to link to a TV to present at meetings. Like Netbooks did in their day, the Toshiba Chromebook fills a need, but for how long we aren't sure. If you're seeking a moderate screen size then the Toshiba is better looking than the similar HP Pavilion, and the keen price is commendable, but if you're taken enough to buy one then you might find that you'll quickly outgrow it.
Single Review, online available, Short, Date: 04/23/2014
Rating: Total score: 70%
80% Toshiba Chromebook review
Source: Trusted Reviews

Not to sound like a broken record but if you can buy into Google’s concept of working entirely in browser windows and getting the most out of it when hooked up to the Wi-Fi, Toshiba's Chromebook is another affordable laptop we'd happily recommend. It's the first 13-inch Chromebook available and the extra screen estate and keyboard space makes it a far more enjoyable Chromebook to use than the 11-inch models. Crucially, it delivers slick performance, good battery life and even serves up some decent speakers to make up for yet another below-par display and a troublesome clickpad.
Single Review, online available, Long, Date: 03/07/2014
Rating: Total score: 80% price: 80% performance: 80% features: 70% display: 60% mobility: 70% workmanship: 70% emissions: 80%
80% Toshiba Chromebook (CB35-A3120)
Source: Computer Shopper

Toshiba's Chromebook CB30 possesses good styling and a useful array of features. At 13.3 inches, it's also a comfortable Chromebook to use. Importantly, it performs swiftly and can do a good job when streaming Web video. However, it has a screen that is very glossy and not as crisp and colourful as we would like. It's the only thing holding it back. Even so, it's still a Chromebook that's well worth considering.
Single Review, online available, Long, Date: 02/17/2014
Rating: Total score: 80%
80% Toshiba CB35-A3120 Chromebook review
Source: IT Reviews

The Toshiba CB35-A3120 Chromebook is a good choice for the general user who wants to give Chrome OS a try. If you have constant Internet access, the system can replace an aging Windows or Mac laptop easily. Its larger screen may be easier on the eyes than an 11-inch Chromebook, for the same price. However, the Acer Chromebook C720P-2600 remains our Editors' Choice for Chromebooks, due to its larger built-in storage, smaller and lighter chassis, and clearer touch screen.
Single Review, online available, Very Short, Date: 02/14/2014
Rating: Total score: 80%
70% Toshiba CB35-A3120 Chromebook review: It hits a sweet spot
Source: PC World

The Chromebook’s other features include 2GB of DDR3L 1600MHz memory and a 16GB SSD. You get 100GB free on Google Drive but for only 2 years, so prepare for the end. Chromebooks are hitting their stride. With the Toshiba CB35-A3120 Chromebook, there’s now a handful of models I’m actually willing to recommend. My current attainable favorite (that is, not the Chromebook Pixel) is the HP Chromebook 14. But for greater portability, competitive attributes, and slightly less cash, the CB35-A3120 is a tempting alternative.
Single Review, online available, Very Short, Date: 02/14/2014
Rating: Total score: 70%
80% Toshiba Chromebook (13-inch)
Source: Laptop Mag

Those seeking the simplicity of a Chromebook paired with a big enough screen to be your primary laptop will be very pleased with the Toshiba Chromebook. For $279, this notebook's display and audio quality both impress. We especially like the more than 8 hours of battery life. Our only complaint is the slightly mushy keyboard.
Single Review, online available, Long, Date: 02/13/2014
Rating: Total score: 80%

77.5%: This rating is not convincing. The laptop is evaluated below average, this is not really a recommendation for purchase. 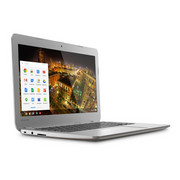 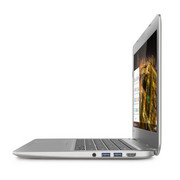 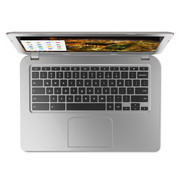 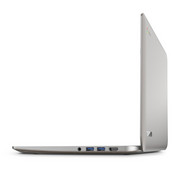 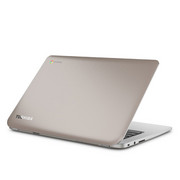 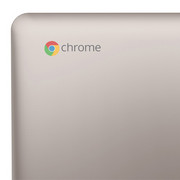