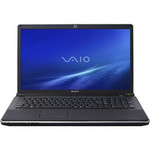 Reviews for the Sony Vaio VGN-AW235J/B

Sony has been producing media enabled laptops for some time and were one of the first to introduce Blu-ray drives. The new VAIO VGN-AW235J/B is a surprise release from the company that makes for an extremely capable high definition media platform at a very reasonable price. While it might still be more expensive than many other desktop replacements, it is still one of the cheapest to feature a Blu-ray burner. Of course, the 18.4-inch screen makes it less portable than those using 17-inch screens and Sony does have fewer peripheral connectors than similar equipped laptops.
4 von 5, Preis gut, Mobilität mangelhaft
Single Review, online available, Short, Date: 01/15/2009
Rating: Total score: 80% price: 80% mobility: 50%