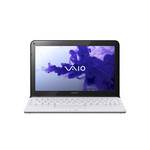 Reviews for the Sony Vaio SV-E11113FXW

The Sony VAIO SVE11113FXW is certainly very affordable for a compact 11-inch laptop system but it can't shake its netbook heritage when it comes to performance. Compound this with below average battery life for a laptop of this class and it just becomes a hard to recommend system with its limited performance that coul be replaced by a tablet or spending a bit more for a more flexible laptop.
Single Review, online available, Short, Date: 10/25/2012
Rating: Total score: 40%
70% Sony Vaio E Series SVE11113FXW review
Source: CNet

Once a popular choice for on-the-go laptop shoppers, the 11-inch laptop has fallen on hard times of late (aside from the $999 11-inch MacBook Air). With only a handful of 11-inch laptops still available, serious travelers are flocking to ultrathin 13-inch models instead. But the low price and good battery life of the Sony Vaio E keep it from being counted out.
Single Review, online available, Long, Date: 07/17/2012
Rating: Total score: 70%

55%: Such a bad rating is rare. There exist hardly any notebooks, which are rated worse.