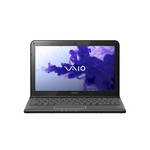 Reviews for the Sony Vaio SV-E11113FXB

Those who like the idea of owning a laptop that's as portable as a netbook but offers more graphics power will find the VAIO E Series 11 to be an attractive choice. Of course, a sub-$500 15-inch notebook is the way to go if performance is a priority. But if you want a cheap secondary PC for travel or you're heading off to school this low-cost VAIO is certainly worth a look.
Single Review, online available, Long, Date: 07/13/2012
Rating: Total score: 60%