So there you have it for this in-depth look at the Lenovo Yoga Tab 3 8-inch! While this tablet checks a lot of the right boxes, with it featuring an excellent design and build quality, exceptional battery life, a near-stock software experience, and a very affordable price tag, it stumbles when it comes to the lower resolution display, disappointing camera, and performance issues. This is certainly not a bad tablet, and the unique form factor and built-in kickstand are big positives as well. However, if that isn’t important to you, there are some better options out there that fall in the price range, such as the ASUS ZenPad S 8.0, or even the still very capable Nexus 7 (2013), that are much better performers, and offer a better package overall.
Single Review, online available, Short, Date: 12/07/2015
Rating: Total score: 72% performance: 50% display: 60% mobility: 95% ergonomy: 85%

The Thinkpad Yoga is a series of ultrabooks manufactured by Lenovo. The Yoga Series was launched during 2012, and its successor, the ThinkPad Yoga 2, was released in the 4th quarter of 2014. The Yoga laptops are made to be as light, thin and portable as possible, targeting the young and tech savvy consumers. The Thinkpad Yoga stands out due to its unique feature of being able to fold flexibly up to 360 degrees to switch to  tablet mode.

The Yoga Series started out in the end of 2012, with the Yoga 11 and Yoga 13 models, which are 11 and 13 inch respectively. Yoga 2 Pro was the second generation to be released end of 2013, a 13.3 inch model that is significantly lighter than the Yoga 13. The latest model to be released in the series is the Yoga 3 Pro, released recently at the end of 2014.

This new model is even thinner and lighter than all its predecessors while maintaining the 13.3 inch size, although due to a more powerful processor the battery life is slightly reduced to just under 6 hours. Besides the ThinkPad Yogas, there are also the IdeaPad Yoga Tablets, which come in 8 inch and 10 inch size as well.

210 MSM8909: Entry-level SoC with four ARM Cortex-A7 cores at max. 1.1 GHz. Furthermore, it features an integrated Cat 4 LTE Modem and 1080p video de- and encoding.» Further information can be found in our Comparison of Mobile Processsors. 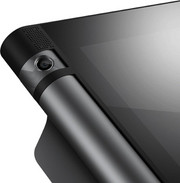