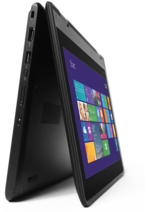 The Lenovo ThinkPad Yoga 11e can't match the performance that you'll get from pricier midrange convertible-hybrid laptops, and it's almost twice the price of the similarly configured, entry-level Dell Inspiron 11 3000 Series 2-in-1. However, if you need a laptop that can stand up to the bumps and bruises of classroom use and life on the road, it'll fit the bill. Although its IPS touch screen is responsive and delivers rich colors, it's a relatively low-resolution display for an $800 system. If you want more bang for your buck and aren't overly concerned with ruggedness, check out our Editors' Choice midrange convertible-hybrid laptop, the HP Spectre x360 13t (13-4003).
Single Review, online available, Very Short, Date: 09/01/2015
Rating: Total score: 70%
70% Is a flexible, durable Chromebook worth almost 500 bucks?
Source: Techradar

The Lenovo ThinkPad Yoga 11e Chromebook is an interesting alternative to a traditional, expensive business notebook. It nails down most of the basics. The 11e features a rugged design, great keyboard, and a decent display with wide viewing angles. Whether Chrome OS can serve as an alternative to Windows is questionable.
Single Review, online available, Long, Date: 11/06/2014
Rating: Total score: 70%
63% Lenovo ThinkPad Yoga 11e Chromebook Review: An alternative to low-end PCs
Source: Notebookreview.com

Finally, while the ThinkPad Yoga 11e Chromebook is heavy compared with other Chromebooks, the extra bumpers are ideal for elementary school children. While middle school and high school students tend to be more careful with technology and won’t appreciate the extra weight that comes from adding more ruggedness to the design, a little extra protection goes a long way. That said, if older students carry this device plus their textbooks, the ThinkPad Yoga 11e would turn their backpack into a heavyweight.
Single Review, online available, Short, Date: 10/22/2014
Rating: Total score: 63%
80% Lenovo ThinkPad Yoga 11e Chromebook
Source: PC Mag

As it stands, the Lenovo ThinkPad Yoga 11e Chromebook is too expensive to recommend, except for schools that want to make the most of their budget—the combination of rugged durability and compatibility with Chrome's classroom management software make this a superb choice when deploying laptops by the dozens. Unfortunately, it's just too pricey for individual consumers. The HP Chromebook 11 (Verizon LTE) remains our Editors' Choice for Chromebooks thanks to its 4G LTE, but if you don't need always-on connectivity, the Acer Chromebook C720P-2600 is our top recommendation, with a lower price, touch capability, and similar performance.
Single Review, online available, Very Short, Date: 10/02/2014
Rating: Total score: 80%
60% Lenovo ThinkPad Yoga 11e Chromebook
Source: Laptop Mag

The idea of giving Chromebooks to students makes a lot of sense, whether the system is being provided by the school or gifted by the parents, because Google's OS is easy to use, extremely secure and nearly impossible to infect with malware. The Lenovo ThinkPad Yoga 11e Chromebook stands out as a particularly strong choice for kids because of its durable design and springy keyboard.
Single Review, online available, Long, Date: 09/26/2014
Rating: Total score: 60%
78% Lenovo brings the flexibility of a Yoga to its touchscreen Chromebook
Source: CNet

Lenovo's Yoga 11e is unique among Chromebooks, combining a touchscreen, rugged body, and hybrid hinge design. For students and teachers, it may be exactly what they're looking for, and also makes a compelling case for cloud-heavy use on the road -- if that road involves a lot of bumps and bashes.
Single Review, online available, Long, Date: 09/19/2014
Rating: Total score: 78% performance: 70% mobility: 60%
Lenovo ThinkPad Yoga 11e Chromebook Review
Source: Slashgear

As far as Chromebooks go, the ThinkPad Yoga 11e stands out from the crowd for a couple different reasons: the design and the convertible construction. Unlike some competing models, the Yoga 11e doesn't look like a toy, and it has the distinct Lenovo feel that fans will be familiar with. The ability to fold the display back completely into a tablet mode is a big plus.
Single Review, online available, Very Short, Date: 09/02/2014

But is it worth $479? For school districts, buying in bulk and saving thousands by deploying Chromebooks instead of Windows laptops, sure. For individuals, the price tag is more daunting, but the 11e deserves to be on your short list anyway. To put it another way, we're not complaining that it costs more than $199, but if Lenovo could somehow cut it to $399, this would be a five-star review.
Single Review, online available, Medium, Date: 08/29/2014
Rating: Total score: 80%
ThinkPad Yoga 11e review: A hidden Chromebook gem
Source: Computerworld.com

Lenovo's ThinkPad Yoga 11e Chromebook costs more than any of the entry-level systems, but remember: It isn't meant to be an entry-level system. You get what you pay for -- and if you've got the cash to spend on a midrange Chrome OS device, the Yoga 11e will give you an awesome overall experience that's a meaningful notch above the rest.
Single Review, online available, Short, Date: 08/20/2014

N2930: Soc with an integrated quad core Atom processor clocked at 1.83 - 2.16 GHz (Turbo) and an Intel HD Graphics GPU.» Further information can be found in our Comparison of Mobile Processsors.

72.44%: This rating is bad. Most notebooks are better rated. This is not a recommendation for purchase.