There is no doubting that the Lenovo ThinkPad Edge 11 is an attractive machine both in terms of looks and price. It is light and portable and its battery life is conducive to working outside the office. However, the reflective nature of the screen may prove a challenge for some people and the somewhat cramped keyboard might make it difficult for larger hands to work comfortably.
Single Review, online available, Medium, Date: 02/17/2011

The Thinkpad Edge series, introduced at the 2010 CES in Las Vegas, were marketed as cheap business notebooks in the lower price segment for small companies and freelancer professional alike.

The main advantage of the Edge series is the premium appearance and feature of the ThinkPad line on top of an affordable price. Reliable performance, good workmanship, matte screen and especially low weight are business-oriented features. Office users should also consider the Edge for its comfortable keyboard, popular trackpoint and high resolution screen.

However, as is is a budget business notebook, corners must be cut for the Edge series to maintain its low price. First of all, as it lacks VGA, HDMI, and DVI, the user must carry an extra adapter while traveling. Average brightness and weak contrast makes the Edge not suitable for multimedia or working under sunlight. Even with the latest generation hardware, the Thinkpad Edge gets with almost 50° Celsius very hot under load on the bottom side. The battery life is also shorter due to its smaller battery – which is noticeable compared to other business laptop. Thus for a long travel, users should always have an adapter ready. The lack of a docking station also somewhat limits the usability of the Thinkpad edge.

Despite all the weakness, the Thinkpad Edge still remains an affordable business and office notebook in the lower price segment. Users with a bigger budget or demanding other features such as a good display or longer battery life should definitely look at other high-end business laptop.

K125: Slow entry level single core CPU for small and light laptops. Still faster as 1.6 Ghz Atom based systems.» Further information can be found in our Comparison of Mobile Processsors. 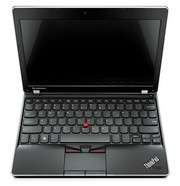