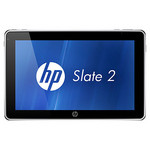 80% Review HP Slate 2 Wi-Fi + 3G Tablet | Notebookcheck
A test of patience. With the Slate 2, the manufacture HP targets business customers who even in the realm of tablets are forced to stick with Windows. These people have to reach deep in their pockets and still be content with a slow Atom Processor. Can the extensive list of features compensate for that?
60% HP Slate 2 review
Source: V3.co.uk

Intel Graphics Media Accelerator (GMA) 600: Integrated (onboard) graphics chip in the Atom Z600 series CPUs with a licensed PowerVR SGX core. DirectX 10.1 support but because of only 4 shaders not suited for 3D games. The integrated video decoder accelerates the playback of HD videos (MPEG2, VC-1, AVC).

Z670: Slow single core processor for tablet pcs that includes the GMA 600 graphics card (with video decoding features) and a DDR2-800 memory controller (max 2 GB).» Further information can be found in our Comparison of Mobile Processsors.