Built for small-business users, the HP ProBook 4425s packs many of the features you'd typically see in enterprise laptops—but at a budget-friendly price. You get a sharp-looking machine with a bright 14-inch screen and a bundle of software conveniences. Business buyers feeling this economy’s pinch will appreciate this budget-friendly ProBook. It isn’t perfect, but handy HP extras make it worth the $699 price.

The HP ProBook 4425s is an attractive-looking SMB laptop, but performance, despite the allure of a quad-core processor, wasn't all it was cracked up to be.
Single Review, online available, Short, Date: 08/24/2010
Rating: Total score: 50%
50% HP ProBook 4425s
Source: Laptop Mag

While it sports an attractive and durable design and comes with helpful security software, the $849 HP ProBook 4425s lacks both the power and endurance of similarly priced competition. For $130 more, the HP EliteBook 8440p, for example, gives you much better performance and battery life; same goes for the $859 Lenovo ThinkPad L412, which has the same RAM and hard drive, but an Intel Core i3-370M processor. Yes, this small business machine gives you quad-core power, but it doesn't last long enough on a charge.
Single Review, online available, Medium, Date: 08/12/2010
Rating: Total score: 50%

59.75%: Such a bad rating is rare. There exist hardly any notebooks, which are rated worse. 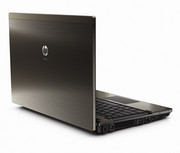