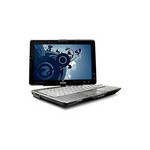 Reviews for the HP Pavilion tx2500z

I did some online research on message boards and tech support forums for the HP Pavilion tx2500z series, and it seems that most user complaints stem from Windows Vista, and were not necessarily about the machine itself. I did read a few complaints about the screen being too glossy, but that’s mainly because it is a tablet PC and a lot of them look that way because of the protective coating over the screen.
Single Review, online available, Short, Date: 06/06/2010
Rating: Total score: 100%

ZM-86: Mixture out of two K8 based cores and K10 uncores (e.g. memory controller). Offers improved power saving functions compared to older Turion CPUs but still not as good and fast as a Core 2 Duo. The ZM-86 is the fastest CPU of the ZM series and a middle class CPU in 2008.» Further information can be found in our Comparison of Mobile Processsors.