Reviews for the HP Pavilion g6-1d80nr

HP's Pavilion g6-1d80nr differs from most because it uses an AMD Fusion processor. While it doesn't have as high of performance as Intel based laptops at this price point, it does offer better graphics performance which may be useful for some buyers. It also features more storage space than others at this price point but it does lack the USB 3.0 ports found on many new laptops used for high speed external storage.
Single Review, online available, Short, Date: 08/07/2012
Rating: Total score: 60% 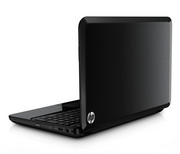