Reviews for the Asus U56E-RBL8

Given its excellent components, the Asus U56E-RBL8 is a compelling choice from a performance standpoint: If you need a relatively powerful laptop but don't want to spend more than $800, it has almost everything you need. Its cousin, the Editors' Choice-winning Asus U56E-BBL6, however, delivers equivalent performance in most areas, runs longer on its battery, is equipped with a USB 3.0 port, and costs $80 less. The extra 2GB of RAM in the U56E-RBL8 isn't quite worth that much, so our final recommendation remains with the Asus U56E-BBL6. Even so, the U56E-RBL8 is a fine machine.
Single Review, online available, Very Short, Date: 11/02/2011
Rating: Total score: 80% 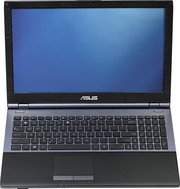