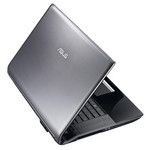 Reviews for the Asus N73SV-DH72

ASUS positions its N73SV as a multimedia laptop between the general purpose K73 and the G74 gaming laptop. Overall, it does its job with media quite well thanks to the large full resolution HD display, Blu-ray compatible drive and some solid speakers not to mention quiet operation for a large laptop.
Single Review, online available, Short, Date: 01/03/2012
Rating: Total score: 60%