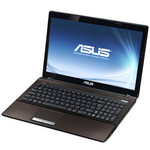 NVIDIA GeForce GT 520M: Entry level graphics card based on the new GF119 chip with a 64 Bit memory bus or on the GF108 with 128 Bit memory bus but lower clock rates.

91%: There do not exist many models, which are rated better. The most ratings get ratings, which are a bit worse.