Many will be attracted to the K50C-SX009V's rock-bottom price tag, but its performance is not in the same league as a proper laptop. If you can accept that what you're getting is essentially a netbook with a larger screen and a built-in DVD writer, you may consider it worth the asking price. But, if you're looking for something with more normal laptop levels of responsiveness, we recommend you spend a little extra on something like the Lenovo B550, which is still cheap, but much faster. 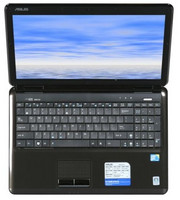