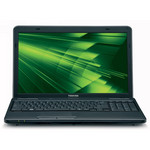 Reviews for the Toshiba Satellite C655-S5049

There is nothing flashy about the Toshiba Satellite C665-S5049, which isn't surprising since it has an entry-level price of $349. Toshiba outfits this 15.6-inch laptop in a plain, matte-black, textured plastic chassis that could be from any manufacturer. The entry-level Toshiba Satellite C665-S5049 won't turn any heads with its plain looks and modest features, but it avoids any serious misstep, a statement not every ultra-affordable laptop can make.
Single Review, online available, Medium, Date: 07/14/2010
Rating: Total score: 60% performance: 60% features: 50% mobility: 70%