Overall I am very pleased with the performance. I happened to replace my previous HP HDX Dragon 20.1" which had a X9000, 8GB Ram and an 8800GTS with this unit due to recent surgery I had so I had to drop the weight of my baby HDX20 (15.5lbs Plus accessories) and shed 7lbs going to this unit. The overall performance with Windows7, and the newer GPU and with a similar CPU minus 3MB cache is better than I was expecting including an increase in 3DMark06 performance my nearly 3.6k in the score which is very nice.
Single Review, online available, Long, Date: 11/15/2009
Rating: performance: 90% display: 70% mobility: 60% workmanship: 100%

The Nvidia GeForce GTX 260M is essentially a higher clocked GeForce 9800M GTX based on the G92b core built under a 55nm manufacturing process. Because of the architectural difference, the 260M is less powerful (and quite dissimilar) to the similarly named desktop GeForce GTX 260.

Mid-range dual core processor with 3 MB level 3 cache and a TDP of 25 Watt. 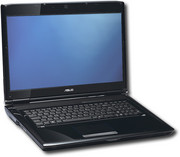