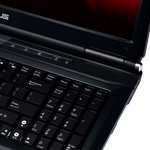 Reviews for the Asus G51J

3D may have first gained popularity in the cinemas of the 1950s, but -- like it or not -- it's also a part of your future. The technology is enjoying a comeback in the realms of TV, handheld games consoles and now laptops. The Asus G51J 3D is the first laptop to incorporate Nvidia's 3D Vision technology. If you absolutely love the idea of 3D gaming, this proof-of-concept system will work well as a pricey showpiece
Single Review, online available, Medium, Date: 04/30/2010
Rating: Total score: 79%
90% Asus G51J Gaming Laptop
Source: Tech2.in.com

Hailing from Asus’ Republic Of Gamers series and equipped with Nvidia’s 3D Vision technology and powerful hardware, the Asus G51J gives a different dimension to gaming, in the true sense. It’s a mean machine with a rich feature set, but can it handle the intensive rendering when it comes to 3D gaming? Let’s find out!
Single Review, online available, Short, Date: 04/22/2010
Rating: Total score: 90%
70% Asus G51J review
Source: Techradar

A powerful laptop with decent 3D capabilities, but it comes at a price. Although the technology world's obsession with 3D has waxed and waned over the past few decades, it's now firmly back in fashion. The price tag also seems a little high. If you are keen to try 3D and aren't necessarily bothered about gaming, the Acer Aspire 5738DZG-434G50Mn might be a better, and cheaper, option.
Single Review, online available, Short, Date: 03/14/2010
Rating: Total score: 70%
ASUS G51J 3D laptop review
Source: T3

When will 3D make up its mind? One year we’re gracing our faces with blue and red cardboard glasses re-announcing the revolution, the next it seems to have died a death. Ultimately the ASUS G51J succeeds in bringing 3D to the gaming masses, but in our humble opinion the content – as is often the case – has yet to catch up with the technology. Until it does the £1699 price tag seems a little steep, considering there is currently more power available for much less.
Single Review, online available, Short, Date: 03/04/2010
Rating: price: 50% performance: 70%
94% ASUS UL80Vt and G51J: Going for the Gold
Source: AnandTech

We've already discussed our thoughts on the UL80Vt and G51J - you can read the details on pages two and three. Both are great laptops, and while we didn't give either the coveted Gold award they are closer than we've come in quite some time. For those that are wondering, anything earning a Bronze Editors' Choice is (at least in my mind) a 90% score; Silver means 93%, and Gold means 95% or higher. Basically, Gold awards are reserved for unequivocal recommendations, and we do have a few minor complaints with both of these laptops, mostly oriented around the LCDs.
Single Review, online available, Long, Date: 12/15/2009
Rating: Total score: 94%
ASUS G51J Review
Source: Notebookreview.com

The ASUS G51J has a few solid improvements over the older G51VX, most notably the shift from the Intel Q9000 to the Intel Core i7-720QM processor. This change shaved roughly 5 seconds off its wPrime score alone. 3DMark06 performance went up as well, but we didn't see that much of a boost in actual gameplay. PCMark05 is also down, but it is hard to say if it was related to hardware or operating system differences. Overall users who are interested in purchasing this notebook should look at one item; the price. With specifications improving or staying equal, ASUS dropped the price $200, from $1,699 to $1,499. The only items lost were the previously included Eee Stick controllers, which were probably not used many users, if any.
Single Review, online available, Long, Date: 10/19/2009
Rating: price: 80% performance: 70%

The Nvidia GeForce GTX 260M is essentially a higher clocked GeForce 9800M GTX based on the G92b core built under a 55nm manufacturing process. Because of the architectural difference, the 260M is less powerful (and quite dissimilar) to the similarly named desktop GeForce GTX 260.