There are other options in the form of Flipkart's own Digiflip Pro ET701, which has a similar set of specs and is priced much lower than the Fonepad 7. It is missing the voice-calling capability though. The Digiflip Pro XT801 on the other hand has much better specifications but once again doesn't have voice calling features. At this price, the Fonepad 7 hits the sweet spot by offering voice-calling. Just make sure you always carry a cloth to wipe fingerprints with.
Single Review, online available, Short, Date: 10/02/2014
Rating: Total score: 60% price: 90% performance: 70% display: 50% mobility: 80% workmanship: 70%

The new stylish Asus Fonepad 7 FE170CG is the third in the Fonepad series of phone tablets (better known as phablets). This 7 inch phablet stands out from its predecessors, namely the Fonepad 7 ME371MG and ME372CG, with its affordability and design. With a width of 11 cm, the newest model fits comfortably in the hand. Additionally, it is the lightest among the three of them with only 290 g.

In order to make the Fonepad 7 FE170CG available to those on a budget, Asus has scaled down many of the features found in the previous releases. For example, the front facing camera is only 0.3 megapixels, as opposed to the 1.2 megapixels featured on the previous two Fonepad 7 releases. Its rear camera is only 2.0 megapixels, the lowest among all the Fonepad 7s. The other attributes of this phablet are pretty standard: a 1024 x 600 display, an Intel Atom Z2520 (1.2 GHz) processor, a dual core 1.2 GHz CPU and 1 GB RAM.

The one encouraging thing about the Asus Fonepad 7 FE170CG is its expandable memory, with a microSD card slot that supports up to 64 GB. It uses the special ASUS developed ZEN UI skin on an Android Jellybean 4.3 OS, which is clean, neat and simple to organize. This would be the ideal gadget for anyone on a tight budget with low performance demands. 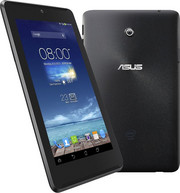 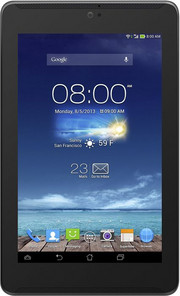