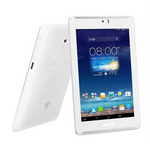 Starting at £199, it does seem a little overpriced, particularly compared with Asus's own impressive £120 Asus MemoPad 7. However, that model does lack the SIM-card slot so there's no 3G/4G connectivity or ability to make phone calls and send texts.
video review
Single Review, online available, Very Short, Date: 08/21/2014

It's tricky to give the Asus Fonepad 7 LTE a solid verdict, because it's a device we think will appeal to only a few. For anyone looking for a 7in tablet that can make phone calls, the Asus Fonepad 7 LTE is certainly worth a look, though we're not completely sure why you'd want to make phone calls on a 7in tablet. If you're just looking for a 7in tablet, you'll find better elsewhere. We really liked Asus's £120 Memo Pad 7, and we also love the Nexus 7. Pair the Memo Pad 7 with the £135 Motorola Moto G (which we gave a Recommended award and named 'the best budget smartphone ever) and you're looking at £255 for a brilliant 7in tablet and a brilliant smartphone.
Single Review, online available, Short, Date: 07/21/2014
Rating: Total score: 60% price: 50% performance: 50% features: 60% workmanship: 60%

Z2560: SoC with an integrated dual-core Atom based CPU clocked at 0.9 - 1.6 (short bursts), a 400 MHz PowerVR SGX 544MP2 graphics card, and a dual channel LPDDR2 memory controller.» Further information can be found in our Comparison of Mobile Processsors.

74.33%: This rating is bad. Most notebooks are better rated. This is not a recommendation for purchase.