Reviews for the Acer Iconia-6120

Acer Iconia 6120: Vision of the Future
Source: Inside HW

Acer’s Iconia 6120 is one of the pioneers that’s here to show how PCs are to be used in the visible future. It’s up to the users to decide whether they’ll reach for the future immediately, or wait for a couple more years.
Single Review, online available, Short, Date: 07/23/2011

Acer would have been much better off equipping the Iconia with a standard physical keyboard and replacing only the touchpad with a fairly high-resolution 4-inch touchscreen. It's good to see Acer trying some aggressive designs, especially ones as aesthetically pleasing as the Iconia's, but as a practical matter it just doesn't make sense to replace the lower deck of a Windows laptop with a touchscreen.
Single Review, online available, Short, Date: 05/02/2011
Rating: Total score: 60%
70% Acer Iconia 6120
Source: Mobile Tech Review

But for the rest of the world that depends on a keyboard for lots of typing on the road, the Iconia is a harder sell. The on-screen keyboard is very well done, but there’s no way it can compete with a hardware keyboard. And the 6120’s odd lack of Bluetooth mean you can’t even bring a portable folding Bluetooth keyboard with you on the road (unless you get a USB Bluetooth dongle too). Lastly, though some of you think the stylus is so last decade, active digitizers still sell a healthy number of Windows tablets because artists, note-takers, science types who use equations and vertical market workers rely on the pen. The Iconia could have had that market if they’d only included an active digitizer in the upper display.
Single Review, online available, Medium, Date: 04/12/2011
Rating: Total score: 70%
70% Acer Iconia-6120 Touchbook
Source: Computer Shopper

No category of computing is bigger and bolder here in early 2011 than touch-interface tablet computers. Some very big players—RIM, Motorola, Hewlett-Packard, Samsung, and others—are all trying to gain a foothold against Apple’s field-leading iPads. This device's dual 14-inch LCDs make for an unusual hybrid of notebook and tablet, but its design and battery life simply demand too many compromises.
Single Review, online available, Medium, Date: 04/01/2011
Rating: Total score: 70%
50% Acer Iconia 6120
Source: PC Mag

We've slammed a lot of Windows-based consumer tablets for not taking the touch experience seriously, so Acer deserves some credit for innovating here. The Acer Ring interface on the Iconia 6120 is a cool way to interact with the notebook; the touch keyboard is workable; and SocialJogger represents a fresh way to access social network information in a single place. Still, this notebook is heavy and its battery life is short. And while the apps are interesting, they take a while to load and don't truly take advantage of the unique design. What this notebook is crying out for is software that can better take advantage of the two displays when laid flat, especially games. Overall, the Iconia 6120 is a fresh take on the Windows tablet, but we'd like to see a slimmer design and a wider selection of touch apps.
Single Review, online available, Long, Date: 03/28/2011
Rating: Total score: 60%

480M: The Core i5-480M has only 3 MB L3 Cache (compared to the I7-620M) and clocks between 2.66-2.9 GHz (Turbo Mode). Thanks to Hyperthreading, 4 threads can be processed simultaneously. An integrated graphics card (GMA HD) and a DDR3 memory controller are also included in the package.» Further information can be found in our Comparison of Mobile Processsors.

62%: Such a bad rating is rare. There exist hardly any notebooks, which are rated worse. 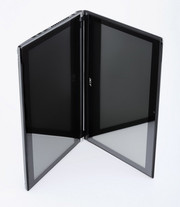